TEHRAN (IQNA) – The Imam of the Toronto and Region Islamic Congregation (TARIC) in Canada’s Ontario walked into the mosque’s foyer on Monday morning with a large rock in his hands. 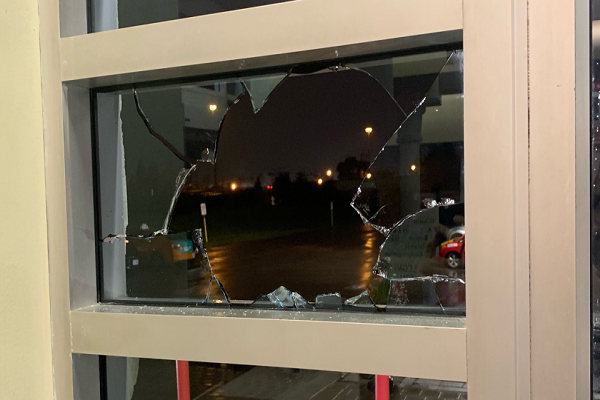 “It would take a lot out of me to throw this rock, the way it was thrown,” Imran Ally told CTV News Toronto.

The rock in question is estimated to be 12 to 15 pounds, but surveillance video captured by the mosque’s security cameras shows a man throwing it towards the building with one hand.

“I think from the video you can realize this person had a lot of energy. So to be in a situation where someone had that much energy is very scary and intimidating,” Ally said.

The video, which was captured just before 8:00 p.m. on Nov. 9th, shows a man walking toward the mosque and hurling the rock toward the front door, before quickly walking away. In the background, one can see the mosque’s custodian looking panicked and trying to stay clear of him.

“That’s what’s very troublesome,” said Ally. “Someone is going to come to do harm and even in the presence of others, they’re still driven to do something dangerous like that — it’s very scary, very worrying.”

Imam Ally says this isn’t the first time the mosque has been vandalized. On Aug. 17, he says three windows were broken. The perpetrator remains outstanding.

Mayor John Tory visited the mosque on Sunday and tweeted, “This hatred and bigotry has absolutely no place in Toronto.”

Meanwhile, in a press release, Haroon Salamat, chairman of Islamic Centre called this an “ugly act of deliberate vandalism” and said this is the second act of vandalism to occur within four months.

Imam Ally says that, while he doesn’t yet know the motivation behind this act, the fact it occurred at a place of worship is very concerning.

“You’re watching over your shoulders. You don’t know what can happen and I feel that’s not safe for worshipers of any faith, and places of worship should not have to be vigilant for something like this.”

The Imam says the mosque’s custodian called 9-1-1 immediately after the incident and a man was arrested shortly thereafter.

Toronto police confirm that 50-year-old Jeffery Petit was charged with mischief under $5,000 and appeared in court on November the 10th.