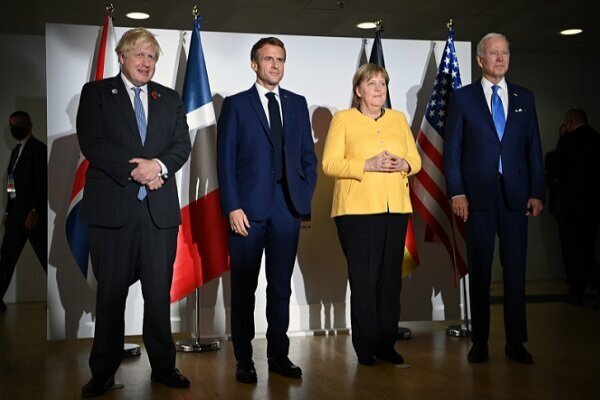 British Prime Minister Boris Johnson, French President Emmanuel Macron, German outgoing Chancellor Angela Merkel and US President Joe Biden called for quickly resumption of nuclear talks with the Islamic Republic of Iran in a joint statement they issued after their meeting on the margins of the G20 summit on Saturday.

The four leaders claimed that a return to compliance with JCPOA would &#8220;provide sanctions lifting with long-lasting implications for Iran’s economic growth,” CNN reported.

&#8220;We call upon President Raeisi to seize this opportunity and return to a good faith effort to conclude our negotiations as a matter of urgency. That is the only sure way to avoid a dangerous escalation, which is not in any country’s interest.&#8221;

The joint quadripartite statement went on to express concerns over the high uranium enrichment level in Iran.

The new Iranian administration has vowed that it will return to the Vienna talks soon but they must be result-oriented and can yield tangible results for Iran in terms of the removal of the sanctions and abidance of the parties by the JCPOA provisions.

Amid the indifference of the JCPOA parties to continued US violations of the JCPOA, Iran halted voluntary implementation of the Additional Protocol, which allows unannounced inspections of its nuclear sites by the IAEA inspectors as per a piece of legislation approved in the Iranian parliament last December.

Iran has also increased the level of uranium enrichment beyond the level allowed under the JCPOA in accordance with the accord itself.

Heads of 3 branches of Iran government convene for a meeting

Iran not to tie nation's fate to any foreign country

Vienna talks to be held in a different hotel: reports