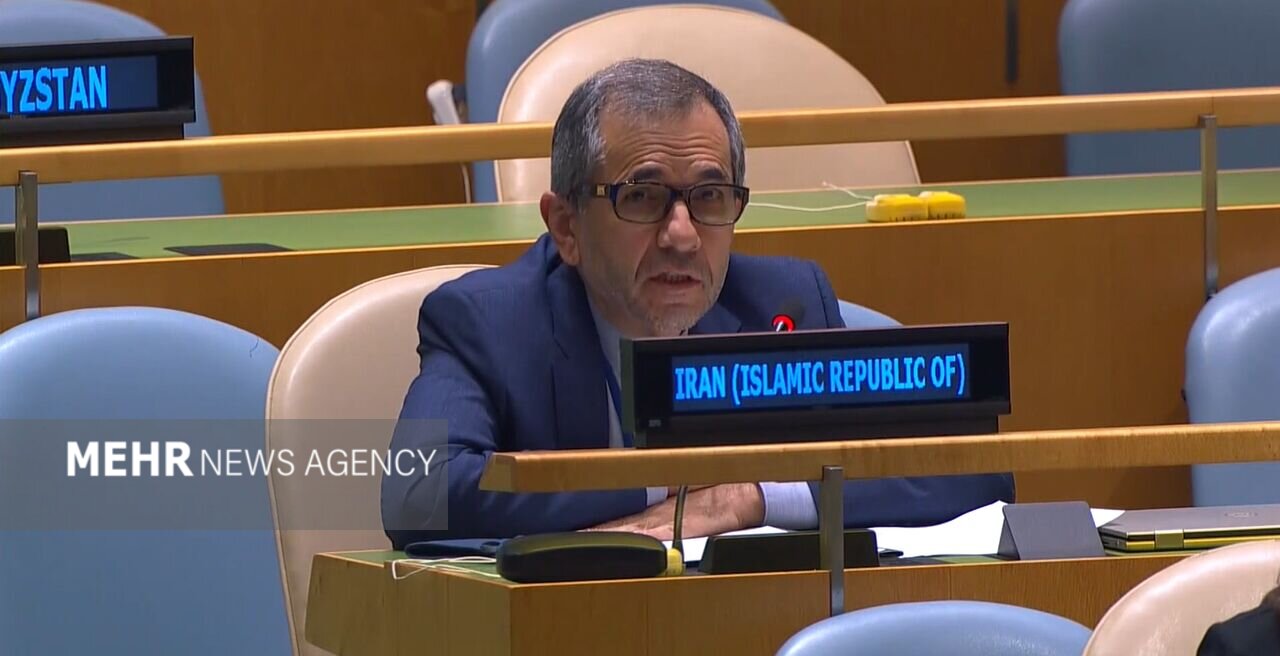 “I would like to begin by thanking Mr. Geir Pedersen, Special Envoy of the Secretary-General, for his efforts particularly in the course of preparation of, and during, the sixth meeting of the Constitutional Committee,” said Majid Takht-Ravanchi on Wednesday in New York before the UNSC meeting on “The situation in the Middle East (Syria – Political and Humanitarian)”.

“We welcome the first face-to-face meeting of the Committee’s co-chairs to discuss directly the modalities and program of work of the Committee. This, in itself, along with the consultations of the Committee members on certain substantive proposals about the Constitution’s elements, that also took place for the first time, is considerable and encouraging progress,” he added.

The diplomat noted, “As has been stressed in the recent meeting of the representatives of the Astana format with Mr. Pedersen in Geneva, we will continue to encourage the Committee’s co-chairs to engage constructively and to work in a spirit of flexibility and compromise. We emphasize again that the Committee must continue its work without any external interference or pressure. Setting an artificial deadline for its conclusion or any other conditions of such nature will negatively impact the Committee’s work and must therefore be avoided.”

“Ultimately, it must be ensured that it is a truly Syrian-led, Syrian-owned, UN-facilitated political process. To complement the Committee’s work, serious efforts must also be made in other areas,” Takht-Ravanchi said.

Iran UN envoy went on to say, “Firstly, the occupation of parts of Syria by foreign forces must come to an end. Accordingly, all occupying and uninvited foreign forces must leave that country without any precondition or further delay. In this context, the Security Council must live up to its responsibility and compel the Israeli regime to end the occupation of the Syrian Golan and also stop immediately its aggressions against Syria. Aggressions and destabilizing measures of the Israeli regime constitute flagrant violations of international law and continue to threaten regional and international peace and security.”

“The assassination, on 16 October 2021, inside Syria, of Midhat Salih, a Syrian citizen, by the Israeli snipers from the occupied Golan is among the latest of such adventuristic practices. We condemn, in the strongest terms, this criminal act as well as all violations of the sovereignty and territorial integrity of Syria by the Israeli regime, and reaffirm Syria’s inherent right to self-defense and to respond at a time and place of its choosing. We also condemn the 20 October terrorist attack in Damascus, which claimed the lives of 14 people and injured several others,” he noted. “Such terrorist act, once again underscores that the fight against all terrorist groups must continue unabated.”

“We also reject separatist activities or illegitimate self-rule initiatives in Syria and condemn any efforts to support them. Recalling the dire humanitarian situation in Syria, further efforts must be made to alleviate the suffering of the Syrian people in need, including depoliticizing humanitarian aids and supporting Syria’s reconstruction. We also hope that the recent positive approach taken by some countries will help expedite Syria’s reconstruction and the return of more refugees and displaced persons. In this context, we call for the full and effective implementation of resolution 2585, through which the Security Council has called upon all Member States “to respond with practical steps to address the urgent needs of the Syrian people”,” the Iranian diplomat underlined.

Takht-Ravanchi continued, “One such “practical step” can indeed be the removal of unilateral coercive measures imposed on Syria. Unilateral sanctions are used only for the collective punishment of an entire population and, by any measure, are unlawful and inhumane. They must be removed against all targeted countries including Syria, where sanctions not only increase the sufferings of the Syrian people but also adversely affect the activities of the United Nations as well as international and national humanitarian agencies in that country.”

“We also call for the allocation of more humanitarian aid to the cross-line mechanisms as well as enhancing the transparency of the cross-border mechanism and ensuring that aid entered into Syria through that mechanism reaches the actual beneficiaries and does not fall into the hands of terrorist groups. We reiterate our principled position that the Syrian crisis must be settled peacefully and in accordance with principles of international law, particularly respect for the sovereignty and territorial integrity of States, non-intervention and non-interference in their internal or external affairs and peaceful settlement of international disputes. The Islamic Republic of Iran will continue to support the people and Government of Syria to restore the unity and territorial integrity of their country,” he said.

US knows Iran not to bend to its wishes

US knows Iran not to bend to its wishes

US and three European countries violated their obligations