TEHRAN (IQNA) – The mufti of Jerusalem al-Quds and Palestine warned about the Zionist regime’s continued attempts to Judaize the holy city and the illegal raids on Al-Aqsa Mosque. 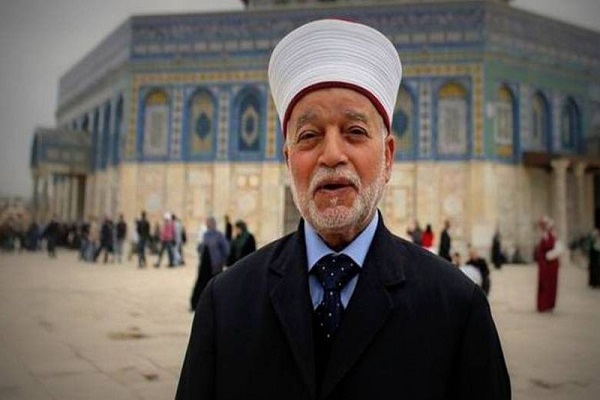 He said the Zionist officials have started restoration work on a synagogue that was built illegally on Muslim lands near Al-Aqsa several decades ago.

The move is aimed at further restricting the areas around the holy mosque, he stated.

By encircling Al-Aqsa with new buildings, the Zionist intend to undermine the Islamic identity of Jerusalem al-Quds, the cleric warned.

He also condemned frequent raids into al-Aqsa Mosque and desecration of the holy place by extremist Zionist settlers and rabbis.

Elsewhere in his remarks, the Mufti deplored the Zionist regime’s decision to build over 1,300 new settler units in the occupied West Bank and continuing settlement expansion projects in the occupied territories.

On Sunday, the so-called Israeli ministry of housing announced in a statement that tenders have been published for 1,355 units in the West Bank and final approval is expected from the ministry of military affairs this week for these settler units.

The ministry further noted that the new units would be added to more than 2,000 settler units that reports said in August would be authorized for Israeli settlers in the West Bank.

The new illegal Israeli settler units are to be built in seven settlement areas and outposts, it added.

The declaration drew immediate condemnation from Palestinians, peace activists as well as neighboring Jordan, which denounced the move as “a violation of international law.”

Since taking over in June, the regime, headed by right-wing premier Naftali Bennett, has begun rapid expansion of settlements in contravention of international law.

Bennett has also ruled out formal peace talks with the Palestinian Authority during his tenure, saying he prefers to focus on economic improvements.

About 600,000 Israelis live in over 230 settlements built since the 1967 occupation of the Palestinian territories of the West Bank and East al-Quds.

Palestinians want the West Bank as part of a future independent Palestinian state, with East al-Quds as its capital. The last round of Israeli-Palestinian talks collapsed in 2014. Among the major sticking points in those negotiations was Israel’s continued settlement expansion.

All Israeli settlements are illegal under the international law as they are built on occupied land. The UN Security Council has condemned Israel’s settlement activities in several resolutions.

Four Arrested in Turkey after Quran Desecration in Football Stadium