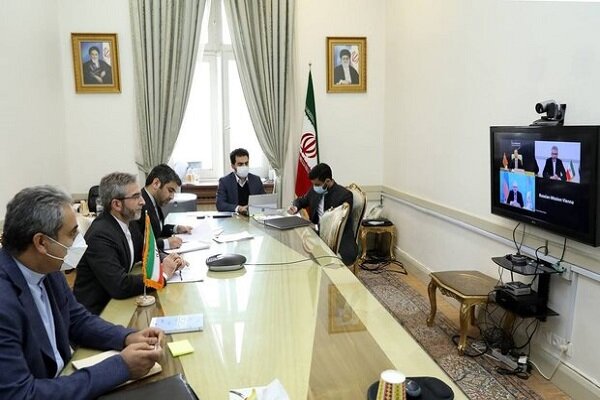 Iran’s top negotiator in talks aimed at removing US sanctions imposed on Tehran said that ensuring effective removal of sanctions is a necessity and the main priority of the upcoming talks in the Austrian capital.

Ali Bagheri Kani made the remarks in a video conference with deputy foreign ministers of Russia and China, Sergei Ryabkov and Ma Zhaoxu, on Monday.

During his Monday talks, Bagheri Kani emphasized that the removal of all sanctions, which have been imposed on Tehran in violation of the 2015 nuclear agreement, and end to measures, which are inconsistent with UN Security Council Resolution 2231, in a verifiable way that would help Iran enjoy the economic and trade benefits of the landmark deal are “necessary conditions” for the Vienna talks to succeed.

He said the three countries of Iran, China, and Russia see eye to eye on the need to promote multilateralism and counter unilateralism. “The oppressive US sanctions against Iran are the price of [the country’s] fight against unilateralism,” he underlined.

The 2015 deal, more formally known as the Joint Comprehensive Plan of Action (JCPOA), was signed by the five permanent members of the UN Security Council — the US, the UK, China, Russia, and France — plus Germany and the EU. Despite the International Atomic Energy Agency’s acknowledgement of Iran’s adherence to all of its obligations, the US government unilaterally withdrew from the agreement in May 2018.

The US government has imposed sanctions under various pretexts in line with its hostile goals against Iran and the advancement of its economic war against Iran.

Iran and the remaining signatories to the JCPOA known as the P4+1 with the indirect involvement of the United States have held six rounds of talks so far with no results. The Western powers made excessive demands during the talks and the talks were halted amid the change in the government in Iran till last Wednesday, the Iranian deputy foreign minister and the new top negotiator Ali Bagheri Kani announced that the Vienna talks will start on November 29 after a five-month halt.

Recently, Kani traveled to Europe for four days for diplomatic consultations and met with the foreign ministries of France, Germany, Britain and Spain. He also met with Enrique Mora, the deputy secretary-general of the foreign action service, who is chairing the meeting of the joint commission of the Joint Comprehensive Plan of Action (JCPOA).

Iran’s top negotiator described the purpose of the talks as the lifting of illegal sanctions.