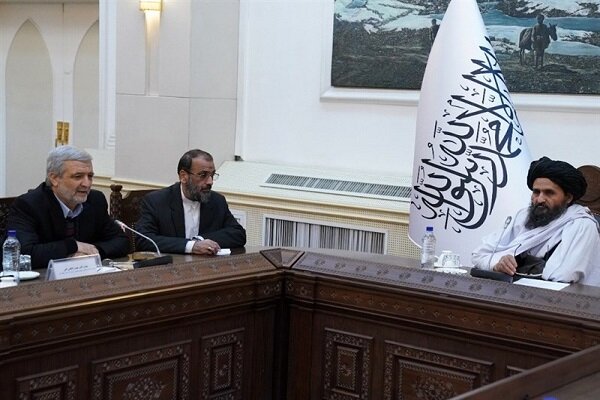 According to a statement released by the Taliban, Hassan Kazemi Qomi and Mullah Abdul Ghani Baradar agreed to “expand relations between the two countries and establish joint cooperation committees in various fields.”

Taliban official Ahmadullah Muttaqi tweeted after the meeting that transfer of the experiences of the Islamic Republic of Iran and fighting terrorism was also discussed at the meeting.

Prior to meeting with Baradar, Kazemi Qomi met and held talks with Taliban’s acting Foreign Minister Amir Khan Muttaqi, during which the special Iranian president’s envoy said Iran and Afghanistan have strong long-standing relations and relations, and the Islamic Republic of Iran will by no means leave the Afghan people on their own.

A spokesman for the Taliban government’s Foreign Ministry Abdul Qahar Balkhi said about the meeting between Kazemi Qomi and Amir Khan Muttaqi on Twitter that the two sides discussed economic, trade and development projects, and emphasized the need for such meetings to continue.

Afghan businessmen import $1 billion worth of goods from Iran