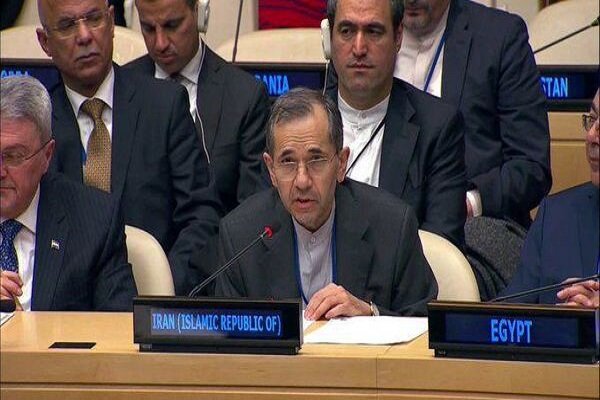 Addressing the UN General Assembly on Tuesday, Iran’s permanent Ambassador to the United Nations Majid Takht-Ravanchi said, “The use of sanctions as blunt and blind instruments has raised fundamental ethical questions about whether sufferings inflicted on vulnerable groups is a legitimate means of exerting pressure on the targeted country.”

He added that certain Security Council sanctions had been used in the past only to collectively punish an entire nation, without any actual positive impact on the maintenance of international peace and security.

“Sanctions must be applied very rarely, in an actually smart and targeted manner, with limited scope and duration, and only when all ‘measures not involving the use of armed force’ are exhausted and have truly ‘proven to be inadequate’ to ‘maintain or restore international peace and security,” the Iran UN envoy noted.

Takht-Ravanchi went on to say, “The Council’s reform must be considered as a comprehensive process, in which all five core issues under consideration must be treated equally, discussed thoroughly, and addressed in a package as they are interlinked and, as a whole, are greater than the sum of their parts. Therefore, any selective approach must be avoided.”

The Iranian ambassador added that Iran attached great importance to ensuring “equitable representation” in an expanded council and strongly believed this could not be realized only through safeguarding “geographical representation”.

Criticizing the West’s strong presence and influence in the Council, Takht-Ravanchi said that the three members of the body have veto power, “while the main regions are poorly represented in terms of both the number as well as privileges, including veto power”.

“This means inequality among the regions… The existing inequalities must therefore be addressed both ‘among’ and ‘within’ the regions as they are both necessary and complementary,” he continued.

“We also fully support ensuring equal opportunities for each State within a given region, which, inter alia, can be done through limiting chances for those who have served more in the Council and, instead, provide more advantages to those who have never served in the Council or served lesser,” the diplomat said.

The Security Council’s increasing deficiencies had “resulted in its legitimacy and credibility crisis as well as its serious trust and confidence deficit, making its reform inevitable”, he noted.

“The ultimate goal of the Security Council’s reform must be to address all its current challenges and deficiencies and to evolve the Council into a truly representative, effective, transparent, accountable and above all, rules-based body,” the Iranian diplomat said.

Takht-Ravanchi went on to say that the ongoing attempts focused on the Council’s enlargement, equating it with its reform and efficiency, but this cannot continue at the expense of neglecting or underestimating other issues, adding that a combination of factors like population, economic power and regional position could play a role in achieving such a goal.

Rejecting as unacceptable any reform that serves the interests of only certain regions or a few states, the Iranian official stressed the need to seriously avoid any proposal that would “literally deepen the current imbalances or reduce the equal chance for states to become a Council member or contradict such intrinsic principles as sovereign equality and equal rights of states, transparency and accountability”.

Iran backs reforms to the Council’s working methods that would ensure that it acts “in full compliance with international law, particularly the UN Charter,” he stated.

Takht-Ravanchi further pointed to the Council’s political and moral responsibility to act properly and responsibly and said its members must avoid taking decisions based on their own national interests or that of the geopolitical or geographical groups they belong to “but based on the common interests of the entire membership of the Organization.”

“The Council must never be used as a tool to pursue national political interests and agendas. The Council is responsible before the Member States on behalf of whom it acts and must therefore remain accountable to them,” the Iranian diplomat said. “The Council shall also not consider issues which do not fall within its purview or are conferred by the Charter to other UN organs, and in particular it must stop encroaching upon the functions and powers of the General Assembly.”

The Iran UN envoy also warned that making hasty decisions or setting artificial deadlines for its work will be counter-productive, saying any possible decision, procedural or substantive, at any stage must be adopted only by consensus.

“We also do not support text-based negotiations at this stage. Moreover, changing the rules or format of the process or its informal nature seems to be unconstructive and must therefore be avoided,” he added.

To hold US, Israel accountable for Soleimani assassination

Vienna talks can succeed only by effective implementation of JCPOA: Ravanchi

Vienna talks can only succeed through genuine political will

Any use of force, threat in cyberspace condemned: UN envoy

To hold US, Israel accountable for Soleimani assassination

Vienna talks can succeed only by effective implementation of JCPOA: Ravanchi

Vienna talks can only succeed through genuine political will

Any use of force, threat in cyberspace condemned: UN envoy

Proximity of Islamic Denominations A Prelude to Unity

UNSC must compel Israel to end occupation of Syrian Golan