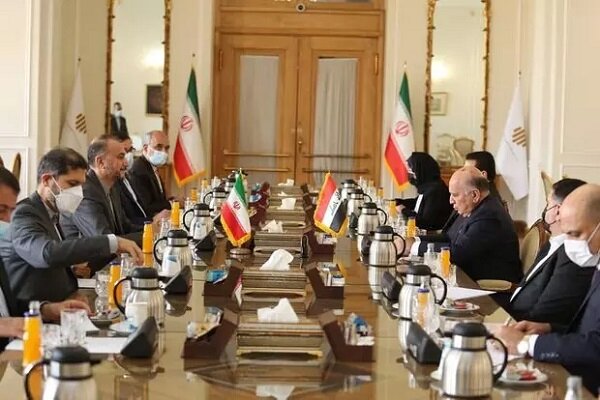 According to the official website of the Iranian Foreign Ministry, Iranian Foreign Minister Hossein Amir Abdollahian hosted his Iraqi counterpart Fuad Hussein and his entourage including Qassim al-Araji, the Iraqi government’s national security adviser in Tehran on Thursday. The two sides discussed various issues of mutual interest at the bilateral, regional and international levels.

In this meeting, Amir Abdollahian congratulated the successful holding of the Iraqi parliamentary elections and emphasized Iran’s support for the democratic process in Iraq.
He referred to Tehran’s determination to fully expand contacts and interactions at the government, private and popular levels and announced Iran’s readiness to waive visas for the travel of citizens of the two countries.

Amir Abdollahian also expressed hope that with the visit of Iran’s minister of roads and urban development to Iraq next week, the two sides will see the finalization of preparations for implementing the Shalamcheh-Basra railway project.

Amir Abdollahian stressed that many trade and economic capacities of both sides have not been used, and with the implementation of previously agreed projects and the greater connection between the economies of Iran and Iraq, there will be significant enhancement of relations in a short period of time.

In the meeting, Amir Abdollahian also referred to the second anniversary of the martyrdom of General Qassem Soleimani and Abu Mahdi Al-Muhandis. He expressed hope that with the formation of a joint judicial committee, there will be more serious efforts to go after the perpetrators and orchestrators of this terrorist crime and bring them to justice.

In this regard, the Iranian foreign minister welcomed the decision of the parliament, government and people of Iraq to kick out US troops from their country. Amir Abdollahian said the Iraqi army, government and people are at such a level of capability and maturity that they are fully able to preserve their sovereignty and security. Fuad Hussein also thanked Iran for all its support and sympathetic position and announced Iraq&#8217;s readiness to expand bilateral relations, especially in trade and economic fields.

He referred to the joint projects between Iran and Iraq, saying today is a good opportunity for bilateral relations to see a leap in various areas.

The Iraqi foreign minister also presented a report on the latest security situation in his country and about the withdrawal of the US from Iraq.

The two foreign ministers also discussed other issues, including Afghanistan, the Vienna talks and the fight against terrorism and Daesh in Iraq and Syria.

It should be pointed out that during the meeting, Iran’s foreign minister praised Baghdad&#8217;s initiative to host talks between Iran and Saudi Arabia, as well as its admirable efforts to return to Iran Mr. Irlu, late ambassador of the Islamic Republic to Yemen.

A new chapter has opened in Iran-Azerbaijan relations