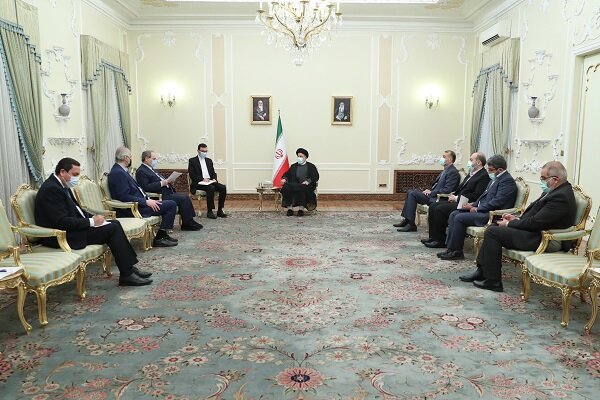 Speaking in a meeting with the Minister of Foreign Affairs of Syria Faisal Mekdad on Monday, Raeisi said, “Today, long-term, comprehensive planning should be done to develop and deepen relations between Tehran and Damascus.”

Raeisi pointed to the illegal presence of foreign forces in the region and in Syria, calling it dangerous for the security and stability of the region, saying, “ISIL is made by the Americans and today the presence of ISIL and the United States everywhere in the region is a great damage to security, stability and peace of peoples.”

“Great martyrs such as Haj Qasem Soleimani crippled the United States and its proxy groups in the region, including ISIL and Zionist terrorism,” Raeisi pointed out.

The Iranian President stressed the importance of maintaining Syria’s security and stability and its authoritative presence in regional equations and said, “Today, Syria is at the forefront of resistance against the Zionists with its anti-Zionist approach and the history of the resistance of Syrian people and government against cowardly aggression will be proudly recorded.”

Syrian Foreign Minister Faisal Mekdad, for his part, conveyed the message of the Syrian President Bashar al-Assad and invited President Raeisi to visit the country, saying, “Syria is determined to activate all capacities for cooperation with the aim of growing Tehran-Damascus relations in the interest of the two nations.”

The Syrian people will never forget the support and assistance of the Islamic Republic of Iran, he said, adding, “Syria puts a great emphasis on the continuation of the sustainable, powerful relations that the leaders of the two nations have created, and the blood of Martyr Soleimani guarantees the deep bond between the two nations and we believe that Martyr Soleimani belongs to all of us and we will not forget the sacrifice of our martyrs.”

“With the resistance of the Syrian people and the Resistance Front, the conspiracies of the United States, the Zionist Regime and its allies in the region have failed, and today they have reached the point that Syria has not failed and have changed their approach,” he said.

Iran roads min. due in Baku for bilateral talks

Israel attacks Syria to make up for its defeats

Iran roads min. due in Baku for bilateral talks

Israel attacks Syria to make up for its defeats

Iran ready to coop. with UN to help cease war in Yemen