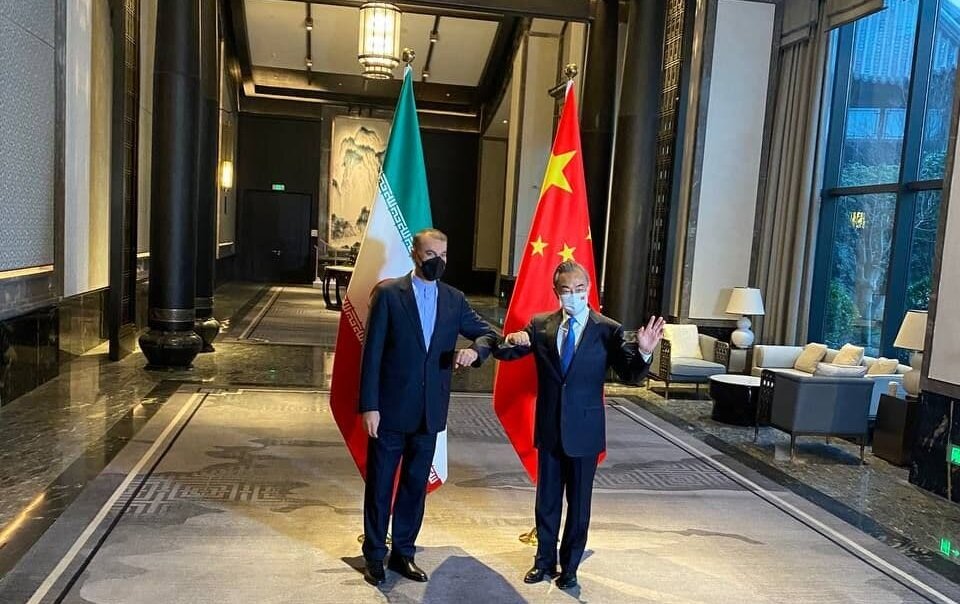 “We agreed to announce today as the date to begin implementing the comprehensive agreement on strategic partnership” between Iran and China, Amir-Abdollahian said, after concluding detailed discussions on Sino-Iranian cooperation with the Chinese foreign minister in China on Friday.

Iran and China signed the landmark 25-year comprehensive strategic partnership agreement in March last year in defiance of the US unilateral sanctions to strengthen the long-standing economic and political alliance.

The deal officially documents the Sino-Iranian Comprehensive Strategic Partnership that had been announced during a visit by Chinese President Xi Jinping to boost economic cooperation between the two countries for the next 25 years and paves the way for Iran’s participation in the Belt and Road Initiative, a massive infrastructure project stretching from East Asia to Europe.

During the Friday meeting with China’s foreign minister, Amir-Abdollahian pointed to the significance of the 25-year partnership agreement signed between Tehran and Beijing and emphasized that the implementation of the document would be an important event and a fundamental change in relations.

Referring to the plans to commemorate the 50th anniversary of the establishment of political relations between the two countries, the Iranian foreign minister voiced Tehran’s readiness to expand all-out relations with Beijing.

He hailed China’s constructive cooperation with Iran in providing more than 110 million doses of coronavirus vaccines.

The top Iranian diplomat outlined the latest state of bilateral cooperation in various fields and said Tehran is resolved to implement all infrastructure agreements with Beijing.

He said extensive cooperation with neighbors and friendly countries in the region is among the priorities of Iran’s foreign policy and added that the Islamic Republic would continue to play a constructive role in regional developments, including maintaining and increasing the security of energy transfer.

He also pointed to the importance of cultural relations and the common capacities of the ancient civilizations of Iran and China and said the Iranian artists’ keenness to develop bilateral cooperation would be a valuable opportunity to take advantage of such a capacity.

The Iranian and Chinese foreign ministers also discussed a wide range of political, economic, trade, consular and cultural issues as well as regional and international developments. During the second round of talks, they exchanged views about the latest developments pertaining to the sanctions removal talks in Vienna and issues in West Asia and the Persian Gulf region.

Amir-Abdollahian arrived in Beijing earlier on Friday at the head of a high-ranking political and economic delegation at the invitation of his Chinese counterpart. Speaking upon his arrival in Beijing, the Iranian foreign minister noted the “very good progress” in China-Iran talks on the expansion of bilateral relations, saying “strategic issues” are being discussed between Tehran and Beijing.

The Chinese foreign minister, for his part, said Beijing completely supports Iran’s wise stance toward the bullying policies of the United States and also its position on the ongoing talks with the five remaining signatories to the 2015 nuclear agreement, urging Washington to make up for the past mistake in withdrawing from the deal.

“In bilateral relations, we enjoy good coordination and diversity in various issues and we have made very good progress in line with the interests of both sides,” he said, adding that “in the new government, we are facing an acceleration” in enhancing relations.