Alfalfa crop has a long history; it was initially farmed more than 6,000 years ago in Persia, known as the “father of all foods”. The mature alfalfa plant is bitter; it must be boiled before consumption. In traditional Chinese medicine, alfalfa microgreens were also used to enhance appetite and treat digestive problems.

They have a terrific texture and a moderate flavour and are rich in nutrients. The full-grown plant is utilized as a medical herb, so it’s no surprise it has an excellent reputation. Alfalfa microgreens are so nutritious. Vitamin K, Vitamin C, Folate, Magnesium, Copper, Phosphorous, Manganese, Zinc, Iron, Thiamine, Riboflavin, Carotene, and Potassium are just a few of the nutrients found in Alfalfa microgreens.

How to Grow alfalfa microgreens Indoors

Alfalfa microgreens are simple to cultivate. They can be grown all year, with the fall and spring seasons being the most productive. They may thrive in a wide range of environments. Alfalfa roots can be cultivated in pots, containers, or trays at home as they grow quickly and do not grow deep.

Alfalfa microgreens will germinate within 3-5 days after sowing. Their harvest time is almost similar to radish microgreens. They will be ready to harvest in 10-14 days if you water them regularly and make sure they get enough light. Weeding and pest control, which can be done organically or with pesticides or herbicides, are required after planting these microgreens. 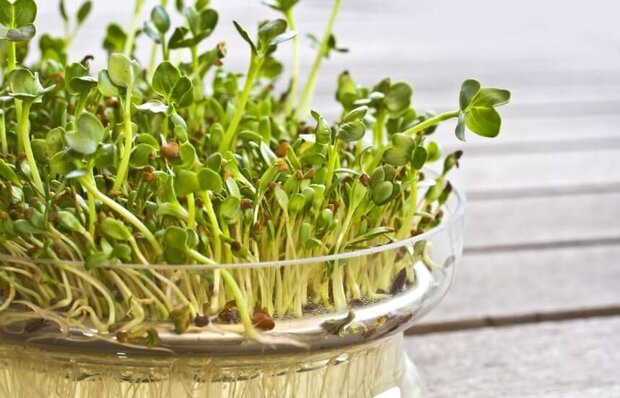 Alfalfa microgreens are among the simplest plants to grow indoors. Because they grow quickly, you may plant them again and again for a year-round supply. All you need is a planting surface, such as a tray or a pot, and enough light, which you may get by placing the tray/pot near a window or using a plant growing lamp during the winter months. Alfalfa microgreens can be produced by doing the following procedure precisely:

Fill the tray with a sterile potting soil or potting mix to a half-inch depth.

To create a flat surface, uniformly distribute the soil/potting mix.

Alfalfa seeds should be equally distributed across the soil surface.

Sprinkle a thin layer of soil/potting mix Over the seeds.

Spray water over the sown seeds with a spray bottle.

Place the tray near a window or a source of light.

Cover the tray with a piece of cloth or a perforated plastic bag to produce a humid and warm atmosphere that encourages germination while allowing proper airflow into the soil and seeds.

Mist or sprinkle water on the developing seeds on a daily basis.

Remove the cloth or paper bag covering the tray once the seeds begin to germinate and the shoots reach a height of 4 inches.

The microgreens will be ready to harvest in 10-14 days. Allowing them to continue to grow will result in seedlings and, eventually, alfalfa plants.

Hold a part in one hand and clip the stems above the soil using scissors to collect the alfalfa microgreens.

Fresh microgreens can be kept in the refrigerator for about a week in a jar. Otherwise, you can dry them and keep them for up to 3 months in an airtight container. 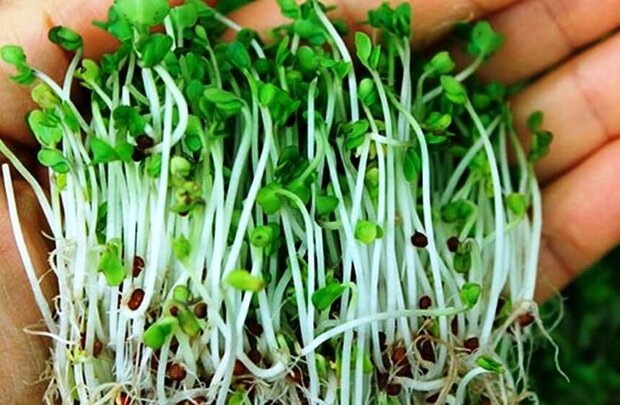 How to grow alfalfa microgreens in pots

Growing alfalfa microgreens in pots are similar to growing in trays, except you’ll use a shallow pot or small containers instead of a shallow tray. The point is that we should not use deep pots; otherwise, we may not get a very good result. If you do not have a shallow pot, make sure to have leca at the bottom of your pot to help drainage water.

This has the benefit of allowing you to grow in small batches and place the pots in more shady areas around the house. This method is a nice one for growing microgreens with kids.

How to consume alfalfa microgreens

Alfalfa microgreens are a terrific way to get more greens into your diet. You can use them in various situations, including Soups, Stews, sandwiches, salads and casseroles.

They can also be combined with fruits or juiced. If you grow alfalfa microgreens inside, you’ll have a steady supply of microgreens throughout the year.

If you are interested in the microgreen’s topic, visit the blog section of top gardening websites which focus on microgreens subject. Some of these websites are gardeners.com, themicrogardener.com, floristkid.com, microgreenscorner.com, feastingathome.com and urbancultivator.net. You can also find some lovely books regarding this topic on the Amazon website.

This article is an advertisement and Mehr News Agency has no opinion on its content.

No cases of Omicron has been detected in Iran: minister

No cases of Omicron has been detected in Iran: minister