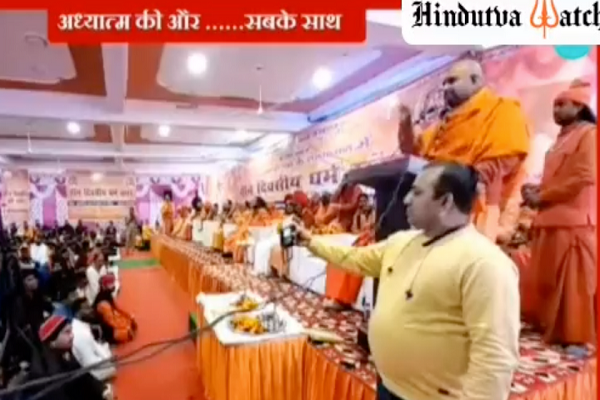 Leaders of several far-right groups with ties to the ruling Narendra Modi’s government have called for ethnic cleansing of minorities in India, especially the country’s 200 million Muslims, in a three-day summit, according to local media and online videos of the event, sparking widespread outrage and calls for action against them.

The three-day hate speech conclave was held by the controversial Hindutva figure Yati Narsinghanand from December 17 to 19 in northern India’s Haridwar city where multiple speakers made calls to kill minorities and attack their religious spaces, The Quint reported on Wednesday.

“Economic boycott won’t work. Hindu groups need to update themselves. Swords look good on stage only. This battle against Muslims will be won by those with better weapons,” Narsinghanand, an engineer-turned-firebrand leader, told the gathering as the crowd cheered.

Another speaker Sadhvi Annapurna, general secretary of the Hindu Mahasabha [Hindu Grand Assembly], called for the mass murder of Muslims, according to the English news website The Wire.

“Nothing is possible without weapons. If you want to eliminate their population then kill them. Be ready to kill and be ready to go to jail. Even if 100 of us are ready to kill 20 lakhs of them [Muslims’, then we will be victorious, and go to jail,” Annapurna said.

The Wire said the summit witnessed an “extraordinary quantity of hate speech, mobilisations to violence and anti-Muslim sentiment.”

BJP politicians Ashwini Upadhyay and Udita Tyagi also participated that “gave the event a level of political encouragement from the ruling party,” The Wire reported.

Speakers cited 2017 mass atrocities against Rohingya Muslims and their exodus from Myanmar as an example and called for a similar policy to enable Muslims’ ethnic cleansing in India.

“Like in Myanmar, the police here, the politicians here, the army and every Hindu must pick up weapons and we will have to conduct this cleanliness drive (ethnic cleansing). There is no solution apart from this,” said Swami Prabodhanand Giri, head of the Hindu Raksha Sena [Save Hindu Army], a far-right group based in northern Uttarakhand state.

“If I was present in the parliament when PM Manmohan Singh said that minorities have first right over national resources, I would’ve followed Nathuram Godse, I’d have shot him six times in the chest with a revolver,” said another speaker Dharamdas Maharaj, according to The Quint.

Godse assassinated Mahatma Gandhi on January 30, 1948, and is hailed by Hindutva groups in India. Maharaj’s remarks were made in reference to Singh’s 2006 Parliament speech in which the then-prime minister said Indian minorities must have the first claim on resources of the country.

A portion of the summit was live-streamed on social media, sparking anger with users using the hashtag #HaridwarGenocidalMeet and #HaridwarHateAssembly to call out the far-right groups.

The Wire also shared photographs of the speakers with members of the ruling Bharatiya Janata Party (BJP) warning, “the statements calling for ethnic cleansing and genocide are particularly alarming” given the speakers’ connections with the BJP.

The controversial conclave of Hindutva chiefs comes more than a week after Indian PM Modi reportedly told a US-hosted “Democracy Summit” that the democratic spirit, including respect for rule of law and pluralistic ethos, is “ingrained in Indians”.

Critics say Modi has failed to intervene and stop rising incidents of attacks on minorities, misuse of religion by Hindu hardliners, and intolerance against dissent in the country.

Since Modi came to power in 2014, Hindu mobs have lynched dozens of people — mainly Muslims and Dalit Hindus — suspected of illegally transporting cows or consuming beef.

Hindu far-right groups have also targeted Muslims over “love jihad”, the conspiracy theory that Muslims are luring Hindu women with the aim of conversion and eventually national domination.