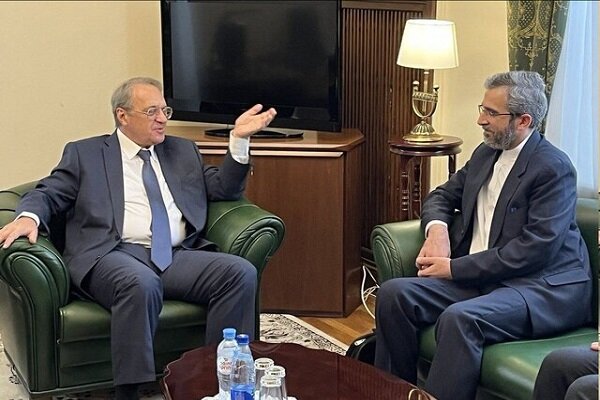 In the meeting, which was also attended by Iranian Ambassador Kazem Jalali on Friday morning at the Russian Foreign Ministry compound, the two sides discussed bilateral relations, resolving existing issues and problems, opening new chapters in bilateral relations and promoting cooperation in various fields in line with the interests of the two countries.

The Moscow visit came after the deputy FM held a meeting with the EU&#8217;s Enrique Mora in Brussels on how to remove US’ unlawful sanctions imposed on the Islamic Republic.

According to Press TV, upon his arrival in Moscow on Thursday evening, Ali Bagheri-Kani told reporters that during his Moscow visit, he will meet with his Russian counterpart, Sergei Ryabkov, on the new round of talks to be held aimed at removing US brutal sanctions against Iran.

“According to agreements with the P4+1 group of countries (Russia, UK, France, and China plus Germany) bilateral talks will be held with every one of these countries to share views on the negotiations, which aim to remove brutal sanctions that have been imposed on the Iranian nation. Within this framework, the first round of talks with the Russian will be held at the invitation of Ryabkov,” Bagheri Kani said, according to a translated edition of his remarks by the Press TV website.

Bagheri Kani added that in addition to sanctions removal, he will discuss the promotion of bilateral relations and other issues of mutual interest with deputies to Russia&#8217;s foreign minister.

Israeli seeks asylum in UK to avoid ‘crime of apartheid’

Iran not to accept new condition in JCPOA

Backlash after Jordan claims Iranian player is not a woman

Iran to prioritize national interests if US violates JCPOA