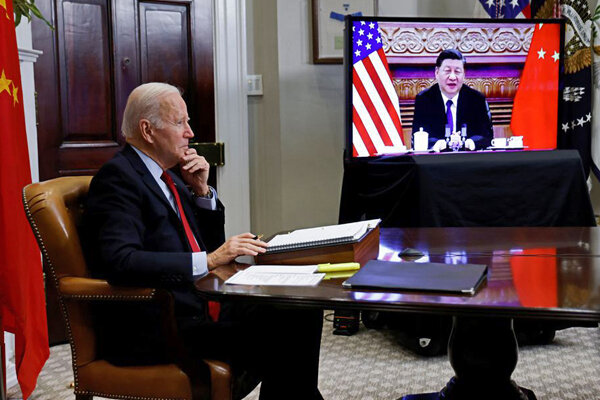 The American president acknowledged during his opening remarks that their responsibilities as the leaders of China and the United States is to ensure ties do “not veer into conflict, whether intended or unintended, rather than simple, straightforward competition”, Sputnik reported.

“We need to establish common-sense guardrails where to be clear and honest were we disagree, and work together where our interests intersect, especially on vital issues like climate change,” Biden said.

Biden added that the relationship between the US and China is not only paramount to their citizens but also to the world, stating his conversation with Xi will include areas where the US has concerns, from human rights to the rising military tensions in the Indo-Pacific.

Both Biden and Xi took the opportunity to agree that the US and China need to increase their communication and foster cooperation to face global challenges.

Xi, agreeing with the earlier sentiments of Biden, said China and the US must cooperate, not only to resolve their internal affairs but also to fulfill international obligations.

“Humanity lives in a global village and we face multiple challenges together,” Xi said, also noting that a “sound and steady” relationship is necessary for their continuing partnership.

Both countries should respect each other, Xi said before relaying that he’s looking forward to moving US-China relations in a positive direction over the two heads of state’s comprehensive discussion.

“I look forward to getting down to business,” the Chinese leader said.

US going in wrong direction under Biden, Democrats: survey

Implementing deals with China on agenda of Iran FM's trip

US going in wrong direction under Biden, Democrats: survey

Implementing deals with China on agenda of Iran FM's trip

US as starter of Iranian nuclear crisis should lift sanctions