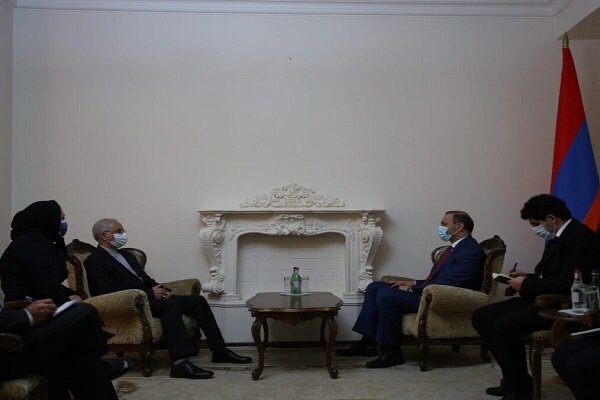 The Secretary of the Security Council briefed the Iranian Ambassador on the situation on the shared Armenian-Azerbaijani border, the Armenia Radio website said on Tuesday.

The two sides also discussed regional security and peace, and the unblocking of infrastructure.

The parties expressed confidence that it is possible to reduce the border tension as soon as possible and stressed a peaceful settlement.

Armenia’s eastern border with Azerbaijan has witnessed a new round of escalating tensions between the two countries while they accuse each other of violations, Russia’s Interfax news agency reported, quoting the Armenian parliament.

Interfax also reported that the Armenian Ministry of Defense announced today that 12 Armenian soldiers had been captured by the Republic of Azerbaijan. The Ministry of Foreign Affairs of the Republic of Azerbaijan stated in a separate statement that it blames Armenia for the deliberate escalation of tensions on the border between the two countries.

Earlier, the Armenian Defense Ministry said that the situation on the eastern border of the country had been very tense since 4 pm (local time).

MPs say no to proposed Education Minister for second time

China, Iran resolutely support each other on core issues