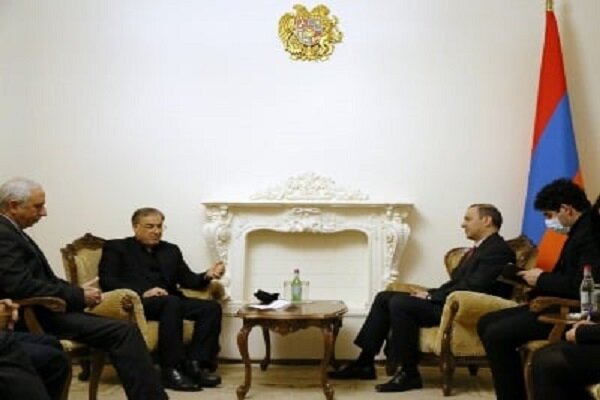 Secretary of National Security Council of Armenia Armen Grigoryan met and held talks with members of Iran-Armenia Parliamentary Friendship Group on Wednesday and stressed the need for cooperation with Iran for the restoration of peace and stability in the region.

The Security Council Bureau of Armenia said in a statement at the start of the meeting, the member of the Commission of National Security and Foreign Policy of Parliament of the Islamic Republic of Iran Mahmoud Ahmadi Bighash expressed gratitude for the opportunity to meet with the Secretary of the Security Council.

Bighash attached importance to the role of the South Caucasus for the Islamic Republic of Iran and emphasized that regional stability and security and inviolability of borders are the red lines for Iran and that Tehran won’t tolerate any territorial change in the region.

Grigoryan, for his part, stated Armenia’s red lines and underscored the imperative of opening an ‘era of peace’ that Armenia had set forth earlier, which also falls in line with Iran’s foreign policy priorities.

Secretary of National Security Council of Armenia emphasized that the friendly relations between Armenia and Iran have recently been growing intensively.

He also attached importance to the opening of Yerevan-Nakhchivan-Jolfa Railway and emphasized that this will lead to the economic development of the countries of the region.

1,400 Iranian-made automobiles to be exported to Azerbaijan