TEHRAN (IQNA) – The head of Egypt’s Al-Azhar Islamic Center, Sheikh Ahmed el-Tayeb, said the center is making great efforts to bring together of followers of different religions and to combat extremism locally and globally. 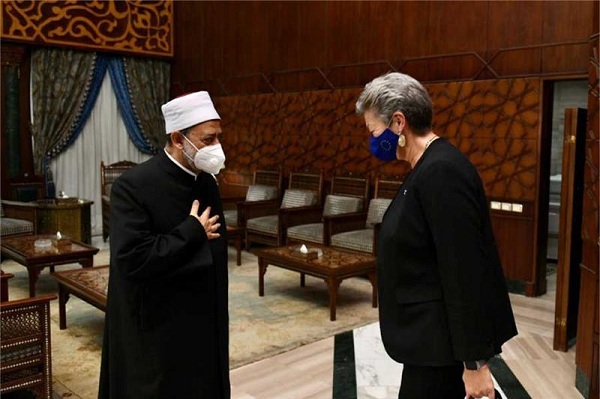 In a meeting in Cairo with the European Union Commissioner for Home Affairs Ylva Johansson, El-Tayyeb discussed a number of Al-Azhar initiatives, including Egyptian Family House, which works to combat intolerance locally, and the Young Peacemakers Forum, which was attended by 25 young people from Europe and 25 from the Middle East to be ambassadors for world peace.

El-Tayyeb and Johansson discussed efforts to prevent extremism and radicalism and to promote co-existence between religions through interfaith dialogue.

The grand imam stressed that religions are candidates for spreading a message of peace provided that they are properly understood and that their leaders are committed to this goal.

El-Tayyeb also talked about the COP26 climate summit, which he hoped would bring more firm recommendations and a greater response from the major industrialised countries that bear the main responsibility for the problem of climate change.

El-Tayyeb said the summit should have called for “a gradual and final halt to [carbon] emissions” instead of the “gradual reduction of emissions” called for in its final statement, which he described as an evasion of the humanitarian responsibility on the shoulders of these countries.

For her part, Johansson expressed her appreciation for the role played by Al-Azhar in promoting interfaith dialogue and confronting extremism locally and globally.

Johansson said the Egyptian Family House is a model for coexistence, and stressed that Europe also faces many challenges such as Islamophobia, the extreme right, and increasing racism, as well as other problems that threaten the security and stability of European societies and require concerted efforts to confront and eliminate.

Johansson said that she sees immigration as natural and that Europe needs an influx of more young people to fill the deficit in its workforce. She said that the EU is working to put in place the necessary legal frameworks to facilitate this with Egypt and its friends from neighbouring countries.